You are here: Home / Homeschooling / Jack and the Beanstalker 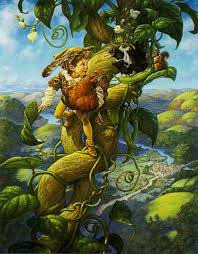 It’s 9:30 PM on a Tuesday night. My three girls and I are in the car following a marathon of activities. It’s dark and unusually quiet.

Perfect delivery. We all crack up. It’s been a really long day. Maybe this makes no sense, but she knows it’s somehow funny. The Adventurer is so proud of her little sister’s sense of humor. She wants to take credit for raising her.

I’m wondering now, where did she get this?

It’s late, so it takes me a while to track what may have gone on in my littlest girl’s mind.

At a party recently, a little boy was going around trying to strangle the little girls he was playing with. His parents were totally relaxed about it, like, oh, there he goes again, trying to kill little girls when they run away from him. The Butterfly actually had marks on her neck, so I gave her permission to defend herself in any way  necessary.  “Can I kick him (raises eyebrows and stares seriously into my eyes) , you know…there?”  “If he’s hurting you, yes.”

I teach non-violence 99% of the time. She doesn’t get a license to kick very often. She ran off,  surprised and delighted.

As we were leaving the party, I expressed my surprise that his parents didn’t react to his behavior with a bit more alarm, or intervene in some way.

The Adventurer added, “They should be worried that he’s going to grow up to be some kind of psycho stalker.” As opposed to a casual stalker, which is so much more common and not as terrifying.

Hmmm. She was listening.

She had watched a Rugrats episode the day before. It was the one where they do their own version of Jack and the Beanstalk.

I’m still mourning the loss of her cute little toddler sayings like hoop a loop (hula hoop) and eyefrows and “Mommy, if this is my four-head, where is my five-head?”

Her world is changing.  Kids try to choke other kids for no clear reason. They steal your cupcake when you aren’t looking. It makes sense that poor farmer boys in fairy tales turn to a life of stalking.

"You really have your hands full," said yet another stranger with a look of sympathy. Do you … END_OF_DOCUMENT_TOKEN_TO_BE_REPLACED

This is the story of  a wedding, a road trip and finding direction. We set out at the crack of … END_OF_DOCUMENT_TOKEN_TO_BE_REPLACED

Create fancy or funky hand fans with your kids in this easy and fun project. You can make these fans using decorative paper – like scrapbooking paper or gift wrap- and finishing them off with a silk tassel, ribbons, or a metal charm. Here’s one of our finished fans: We made a variety of fans, […]