You are here: Home / Motherhood / Wishing you a Gangnam Free New Year

As you hopefully look to the New Year with anticipation, as you are thankful for all the beautiful people in your life right now(as we all should be), remember this: there are people suffering all over the world.

It’s been caused by this ridiculous thing called Gangnam Style. Scores of people continue to throw themselves on cold ground, screaming in pain and begging for mercy.

It’s reminiscent of the crippling epidemic of random vomiting in the mid 90’s caused by the Macarena.

It hit us all before the scars had healed from the emotional and fashion damage caused by MC Hammer, or Hammer (or would someone drop the damn hammer on this guy already?). U Can’t Touch This  left me traumatized and shaken, like a scared little bunny afraid to come out the hole I escaped to.  I was an innocent (that’s right) college girl at the time and a member of the dance team. We were like the Laker Girls, but less hot. And less talented. And with cheesy costumes. We were forced to dance Hammer Style center court in front of a full stadium. I still have nightmares about my Running Man not being up to par. No child should feel that pain. 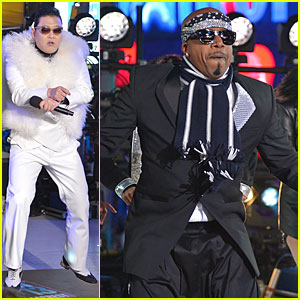 Spreading the infection together. Image via Just Jared

I can just turn it all off now, right? No. My girls are addicted to The Annoying Orange. This fruit recently did a parody of Gangnam Style. I’ll admit, it was funny the first time.

Once, twice, three times is crazy.

It’s been playing constantly.  They know it word for word. They sing it all the time. Not quietly. Not sweetly. Together. As loud as they can.

Hey, flexy gra-pay!
I am sharing this video,  not because I hate you dear readers, but as a way for you to appreciate that you are not at my house now, listening to this for the 645, 859th  time.

Wishing you beautiful New Year filled with love, joy and the ability to laugh at all the crap that comes your way this year.

If you have a child who loves to play computer games but resists homework, have a look at some of … END_OF_DOCUMENT_TOKEN_TO_BE_REPLACED

Last night I had a dream. I was standing in the canned goods aisle at ShopRite and there were only a … END_OF_DOCUMENT_TOKEN_TO_BE_REPLACED

Ready for a different approach to creating art with melted crayons? For this project, we’re adding crayons to a canvas and melting them with a hairdryer. It’s a fun, easy project that your kids will love. I’ve been wanting to try this project for months, ever since I saw it on Decoist. If you need […]